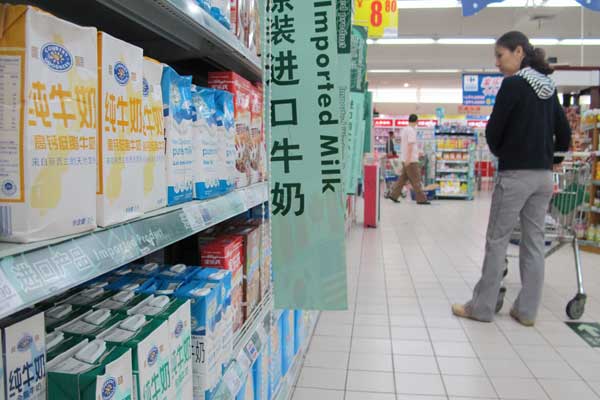 The first thing customers see as they enter the basement of the Wal-Mart Qinghe store in Beijing is a mountain of imported milk cartons.

“My girl is going to stop taking formula milk, so I have to get her some good quality milk,” said Liu Ying, a 30-year-old mother, carrying a shopping basket filled with a range of imported milk.

“I don’t know which brand to take. Maybe I will just take some from world-renowned dairy production places, such as the Netherlands, Australia or New Zealand.”

Liu said she knows the imported milk, with its five-month shelf time and long shipping distance, may not be as good as local fresh milk but “safety is my top concern”.

According to Tesco Plc, the world’s third-largest retailer by revenue, imported milk is one of the fastest-growing categories in their 132 Chinese stores, with year-on-year sales gains of about 30 percent.

The United Kingdom-based retail giant said Chinese like milk from New Zealand above all and many young parents buy several cartons at a time.

Imported milk is Chinese shoppers’ favorite choice on the Internet, too.

On the home page of Yihaodian, a major online grocery store, imported milk is listed as the third top category. Ads flash for promotion deals such as buy one, get one free.

“Room temperature imported milk has been available on Yihaodian.com since 2012,” said Viki Yang, a public relations executive at Yihaodian, which is backed by United States-based Wal-Mart Stores Inc.

“We sold around one container (around 30 tons) per month at the beginning and now we deal with more than four containers per day.”

Yang said Yihaodian has 74 milk brands from 21 foreign countries. The best-selling products are Oldenburger, from Germany and Devondale, from Australia. The e-commerce retailer said it will greatly expand the sourcing of imported milk to a wide range of countries, such as Uruguay, to meet different taste demands.

According to the China Dairy Industry Association, in the first four months of this year, China imported dairy products amounting to 596,200 tons, up 24.6 percent year-on-year.

“Domestic milk consumption has been increasing for years, lifted by rising personal incomes and a soaring milk-drinking population,” said Wang Dingmian, a consultant with the Guangdong Provincial Dairy Association.

He added that besides liquid milk, milk-based beverages, imported cheese and yogurt may become popular.

But Lao said brisker sales of imports are largely due to domestic milk scares.

A series of milk safety scandals, involving milk and infant formula have been exposed since 2008. Toxic chemicals were added to dairy products to yield a higher protein content. The practice killed at least six infants.

The State Council, the country’s cabinet, said it will take effective measures to ensure the safety of baby milk products.

“Food safety is not simply a food problem, it has become a social problem, or even a national image-related problem,” said Ning Gaoning, board chairman of the China National Cereals, Oils and Foodstuffs Corp, at the Fifth China Food Safety Forum.