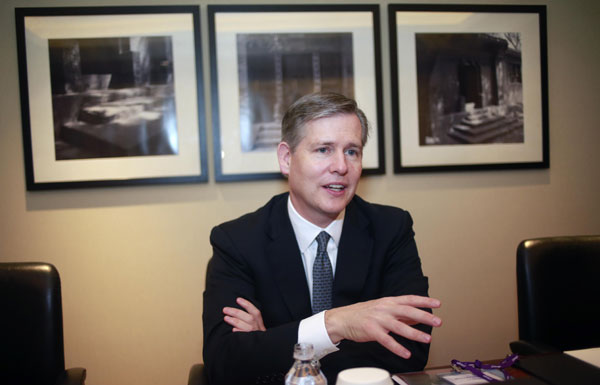 Constantly focusing on what’s truly important at the big end of business and deciding business direction according to clients’ needs are central to the core values of Mike Cavanagh, co-chief executive officer of JPMorgan’s Corporate and Investment Bank.

The demands of investors have really reshaped what a successful business model in banking looks like following the huge destructive global financial tsunami of 2008, the 47-year-old executive told China Daily.

The new combined department is called the Corporate and Investment Bank (CIB). The unification is aimed at strengthening its institutional client franchise in the industry and benefiting both corporate and investor clients.

“For both our institutional and consumer businesses, we wanted to do a better job of organizing ourselves around our clients. That was the driving force behind the changes,” he said.

“I wouldn’t say they were big changes, but I would say it was evolutionary.”

According to a public announcement by JPMorgan, the benefits of the Corporate and Investment Bank include a shared balance sheet that can more effectively deliver credit to clients in the form most helpful to them, as well as the benefits of scale that come from combined resources, infrastructure and technology. A globally coordinated coverage team can also better support clients in an increasingly complex regulatory and economic environment with a comprehensive suite of products and services, it added.

The focusing-on-client business model is expected to drive the CIB to concentrate on improving service efficiency, optimizing many capabilities – cash management, custody, prime brokerage, trading, corporate finance and capital – under one roof and being able to deliver tailored solutions in a holistic way.

In the first quarter of this year, it reported $2.6 billion of earnings on $10 billion of revenues, representing an 18 percent return on capital.

“More important than the numbers, however, is what we hear from clients. It’s a complicated new world that clients have to navigate,” said Cavanagh, who says he is satisfied with the CIB achievements so far.

The executive saw regulatory changes, including what are known as the Dodd-Frank implementation, Basel capital rule changes and Volcker-Vickers, as “a real challenge” in 2013.

To deal with the effect of Basel III regulations, the CIB increased allocated capital reserves to $56.5 billion since the beginning of this year.

But Cavanagh believes there will be more opportunities for financial groups in underwriting capital markets because client needs for capital are growing. His department set up a target return on equity of 16 percent this year.

Cavanagh has seen financial regulation increase over the past few years of the post-crisis era.

“Much of it is for a very good reason. We support higher levels of capital and stronger, more consistent regulatory rules.”
For the United States, regulation has been tightened to address things such as differing mortgage practices and products and improving supervision methods. In the global financial industry, standards need to be set on risk-weighted assets and how capital rules apply, according to Cavanagh.

“Hopefully, we will continue to see more consistency and less opportunity for regulatory arbitrage than existed previously,” he said.

New changes occurred among the big multinational financial institutions, Cavanagh said. “Banks are adapting to changes in liquidity and capital requirements, learning how to set up subsidiaries operating around the world and new rules related to certain products and services.”

In the meantime, many European banks have been de-leveraging because of the stresses brought about by persistent slow economic growth, tightening regulatory requirements and sovereign debt concerns.

“For global wholesale banks like JPMorgan, we benefit from a very significant economy of scale,” Cavanagh said. “We spend approximately $21 billion a year on our resources, people, technology and new products while absorbing the higher cost of regulations.”

“JPMorgan has also always been very client-focused and we know that our clients need a global partner,” the CEO reiterated.

During last year, this financial giant provided credit and raised capital of more than $1.8 trillion for their clients. The company earned a record $21.3 billion in net income as well as $97 billion in revenues in 2012.

Jamie Dimon, CEO of JPMorgan, wrote in a letter to the company’s shareholders in the 2012 annual report: “We are doing big things at a time that calls for just that. We will continue to do so.”

However, one thing occurred last year that Dimon is “not proud of” or even “embarrassed” about. It was the “London Whale”, a big mistake that created up to $6.2 billion of losses from a complex derivatives trade out of JPMorgan’s London offices.

Cavanagh, who can directly report to Dimon as one of the members of the company’s operating committee, was appointed leader of a special team of senior bankers and traders to investigate the event that exposed the financial giant to severe criticism.

He was named “Mr Fix It” by The Wall Street Journal.

“Many of the lessons we learned were actually very simple: In businesses where you are taking market risks it’s essential to have granular limits set around those activities. Controls weren’t in place that should have been,” Cavanagh told China Daily.

Both talented executives and a tight regulatory system are crucial to running a company that undertakes great risk management and requires controls, said Cavanagh. “But most important is a culture of caring about those things.”

“While we have made mistakes, it doesn’t change the fact that our culture and the processes around the controls are strong. We are only making them stronger.”

He believes that a great company is one that can make a mistake and then fixes it so it doesn’t happen again.

Cavanagh said: “We need to eliminate the idea of ‘too big to fail’, meaning that the objective should be to ensure that if management of any bank fails to do its job, that bank should be allowed to fail in a way that doesn’t hurt society.”

It requires policymakers and banking executives to work together, he added.

The Federal Deposit Insurance Corp has shut down hundreds of banks over the past several years. The costs associated with the failed businesses are charged back to the banking industry, not to taxpayers, so it does work, said Cavanagh.